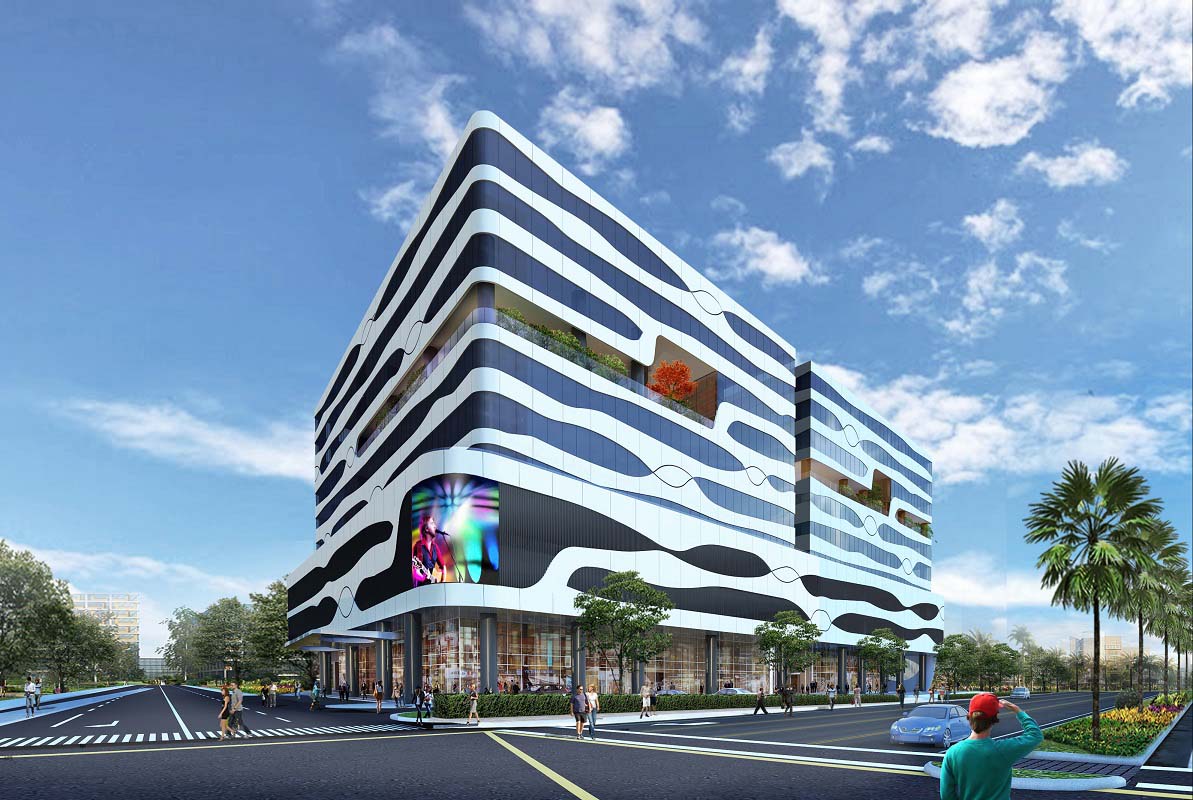 Fittingly described as Scape, after its inception from the landscape and seascape ripple forms – an ode to the natural setting before the project was realized, Scape is an 11-storey mixed-use building in MOA Complex, a reclaimed developing town located south of Manila.

Built on a reclaimed area, the inspiration for the building’s façade was drawn from the ripples of water entrenched on the sandy shores of Manila Bay. The undulating patterns found on the building’s skin mimic the shape of the sea as it slowly drifts off. In a sense, Scape also aspires to produce a ripple effect on its neighboring structures as it sets the standard for building green BPO offices that are environmentally responsible and resource-efficient.

Escape’s most prominent feature is the 5 meter orange Tree that stands tall and cuts through the 9th and 8th floor offices. Its vibrant tangerine leaves glistens in the light and creates an enchanting glow that radiates not only on the deck itself, but also from the busy streets of Macapagal Ave. This gleaming icon is further emphasized against the white and blue rippled patterns of Scape’s façade.

“The design of the Escape is the guiding principle of the Scape development,” said Albert Yu, chairman and principal of ASYA Design. “We have created open green spaces located at multi-level floors. These are filled with native plant species and makes use of native landscaping. The communal garden spaces are encased within the two wings of the development providing a visual connection between indoors and outdoors. Scape’s scenery is based on the belief that a sustainable approach to land development is necessary because it ultimately creates and preserves the maximum value of the resultant development and their associated amenities.”

One of the first gems of its district, the building is the newest mixed-use development having both commercial and office programs in the thriving and expanding Mall of Asia Complex in the city of Pasay. The development caters to the successful BPO industry in the area and the densely populated complex of Mall of Asia with countless residential buildings and lifestyle centers.

Energy conservation is made possible with its high performance glazed windows featuring double-layered glass with IGU and low e-coating. It boasts of its cutting edge green architecture merging modern technology and natural resources. Rainwater is harvested for different everyday uses such as watering plants, toilet flushing, and maintenance cleaning. Low flow plumbing fixtures are installed to maximize efficient water use. To complement the building’s green technology, a row of bicycle storage areas are provided to enhance the user’s green lifestyle.

Offices largely occupy the upper levels, but a towering lobby welcomes guests to a 7-meter high ceiling. A mezzanine level fills the void catering to a bank, coffee shop, and other commercial shops. Open-planned office areas are designed to serve different functions to preserve flexibility and interaction between the different levels. With an average floor plate of 2,700 square meters per office, the building maximizes the space’s potential by housing more users per floor. The building also makes use of the development lot by creating car lifts in the podium parking to maximize space and accommodate required parking.

The building has been recognized by the US Green Building Council as a LEED® Certified™ and LEED Silver® development.